Even out tonal imbalances in a recording or reduce resonant peaks or dips in the frequency spectrum.

Also available for MacOS  and Win32

Acon Digital DeFilter is an efficient tool to even out tonal imbalances in a recording or reduce resonant peaks or dips in the frequency spectrum. DeFilter is available for PC and Macintosh and supports the VST, VST3, AAX and AU plug-in formats. Both 32 bit and 64 bit versions are available.

DeFilter is an efficient tool to even out tonal imbalances in a recording or reduce resonant peaks or dips in the frequency spectrum. Even severe issues such as comb filter effects or standing waves from untreated rooms can be addressed. DeFilter can match recordings to target profiles such as music or speech, or alternatively extract the overall timbre from the source – the large strokes – while evening out narrow peaks and dips. The latter removes resonances and comb filter effects effectively while preserving the tonal character of the input signal. Recordings can also be equalized to match a reference recording.

Great care has been taken to provide a user interface that is straightforward to use. Frequency dependent correction levels can be defined using custom curves, so that DeFilter can focus on problematic frequency ranges while leaving other frequency regions untouched. Realtime spectrum analyzers for both the input and output signals visualize the effect on the frequency spectrum. 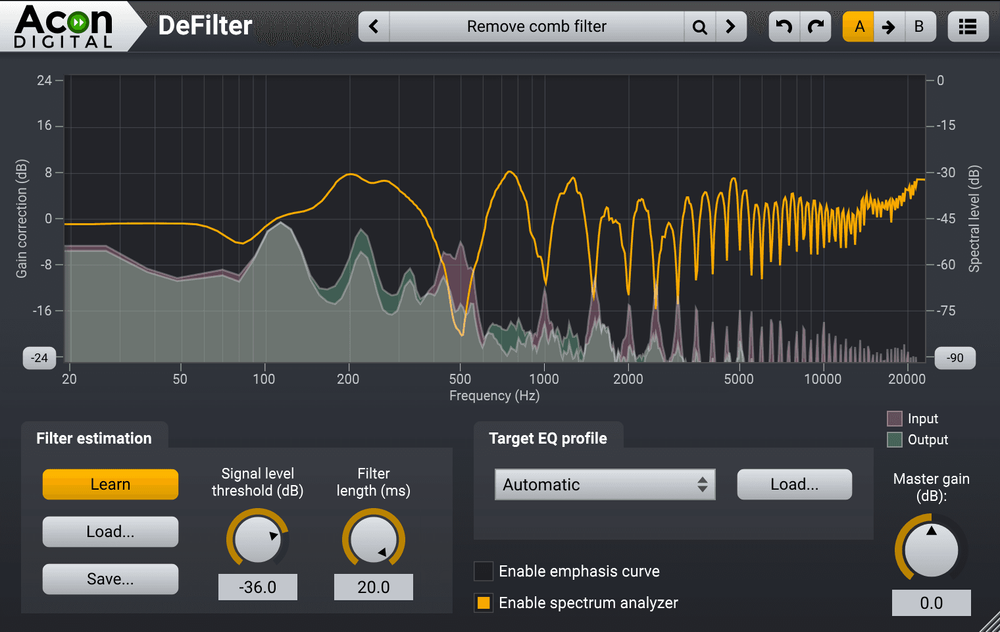 Acon Digital DeFilter is available as VST, VST3 or AAX for both Windows and Mac or as AU plug-ins for Mac. There are 32 and 64 bit versions for Windows. The Mac version is 64 bit and runs natively on both ARM (such as Apple M1) and Intel processors.