Attenuate or boost the reverberation that is already present in recorded material.

Also available for MacOS  and Win32

Acon Digital DeVerberate is plug-in that can attenuate or boost the reverberation that is already present in recorded material. DeVerberate is available for PC and Macintosh and supports the VST, VST3, AAX and AU plug-in formats. Both 32 bit and 64 bit versions are available.

Upgrade from DeVerberate 1.x or 2.x 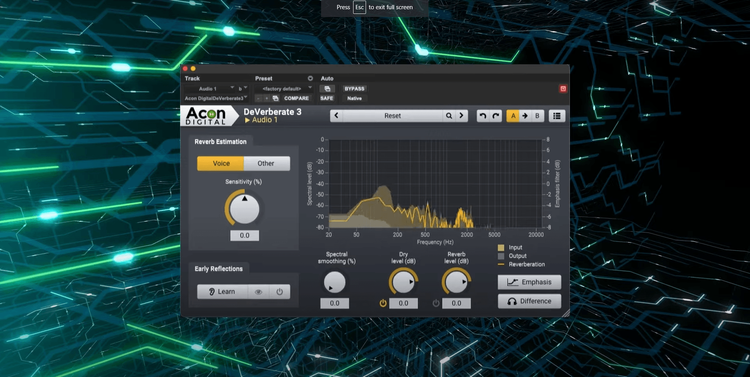 The new DeVerberate 3 — now based on Deep Learning

DeVerberate is a reverb reduction plug-in that can attenuate or boost the reverberation that is already present in recorded material. The new version includes an entirely new algorithm based on deep learning for fully automatic reverb reduction of recorded dialogue. By training a neural network on thousands of high-quality voice recordings and a wide variety of acoustical surroundings, the artificial intelligence can automatically separate dialogue from reverb. 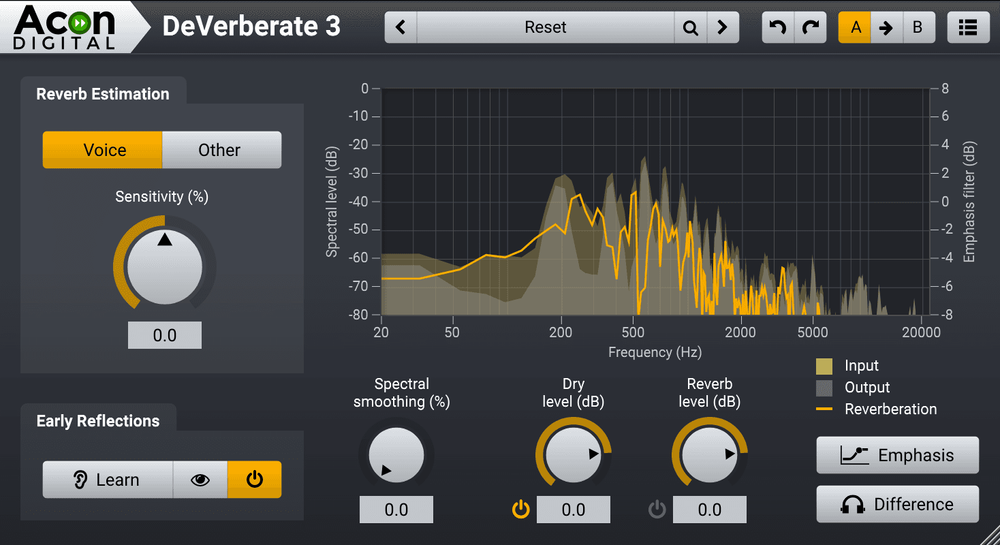 DeVerberate 3 running in the AI based Voice mode.

The reverb reduction algorithm from version 2 is included for music and other audio sources. Both algorithms split the incoming audio into an estimation of the direct sound and the reverberated sound which can then be recombined freely. Additionally, a unique Early Reflections Filter that works in conjunction with the reverb suppression algorithms is included. The Early Reflections Filter uses sophisticated statistical methods to estimate the so called impulse response of the early reflections, which is then used to cancel out the effect of the early reflections.

Acon Digital DeVerberate 3 is available as VST, VST3 or AAX for both Windows and Mac or as AU plug-ins for Mac. There are 32 and 64 bit versions for Windows. The Mac version is 64 bit and runs natively on both ARM (such as Apple M1) and Intel processors.

Once again Acon Digital from Oslo have released an audio plug-in that is innovative, beautifully made and which really works. Deverberate 3 uses AI technology to remove unwanted reverberation from a speech audio signal completely automatically.

To be honest, I'm quite amazed by how quickly and how well this works.